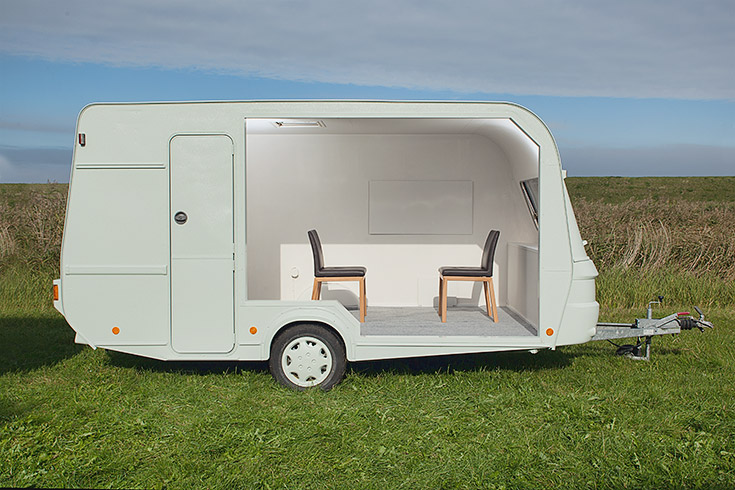 'You always speak badly to someone who isn't listening' observed P J Kavanagh. Dr Karl Augustus Menninger put it the other way round: 'When we are listened to, it creates us, makes us unfold and expand.' Ernest Hemingway looked at it from the perspective of the listener 'I like to listen. I have learned a great deal from listening carefully. Most people never listen.' 'Listen to me' is a common request in everyday language, explicitly asked for or silently thought. The participatory project, LISTENING PROJECT, creates opportunity for experiment. Two audience participants are enabled, through brief instructions followed by a longer period of practice, to see what kind of a difference a formally structured space and a cooperative focus on listening might make to a shared dialogue.

The set for the LISTENING PROJECT is a converted caravan, opened-up on one side, empty except for two chairs. The dialogue lasts 15 minutes with the possibility of an extension for one further 15 minutes. After some instructions, the two participants try out the LISTENING PROJECT together. A wider audience, out of earshot, may watch what is happening from a distance.

The LISTENING PROJECT has been developed and is performed by Rudolf Giesselmann [Hamburg] in cooperation with Susan Tilley [London].

What happens when in a dialogue listening plays a major role? Some experiment results:

Cookies make it easier for us to provide you with our services. With the usage of our services you permit us to use cookies.